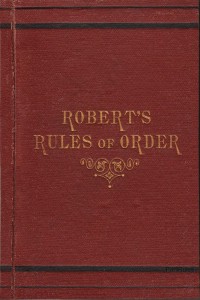 Robert’s Rules of Order is the standard manual used during a “parliamentary” meeting such as a board meeting. It is designed so that in every possible contingency you can think of, there’s a prescribed way to handle it. Some nonprofit bylaws call out Robert’s Rules of Order as the basis for running meetings.

The book was first published in 1876 by Henry Martyn Robert, a U.S. Army Colonel. And at times… well, you can tell it’s based on the ideas of a nineteenth-century military man.

The entire set of rules is laboriously complex. As an elected official who sits on a legislative body that uses Robert’s Rules, I have read a lot (but not all) of the book. And I can tell you, without a doubt, it’s boring. I have met only one or two nonprofit board members who have even picked up a copy.

There is, thankfully, a “brief” version. It’s still two hundred pages, but that’s a lot shorter than the long one. Your nonprofit may wish to buy a copy of the short version and have it at the meeting, just to have around on the off chance you need it.

Despite how few people have read the book, Robert’s Rules of Order is the standard basis for running meetings. If you’ve served on almost any board, you likely are familiar with the gist of it.

What is the point of this old-fashioned system? At its most basic, it prevents meetings of groups of people (including unions, political parties, clubs, and associations) from descending into chaos. It also provides a structural way to give a dissident a path to make their case or, at least, go on record as being against a particular measure.

Here is an overview of how votes are taken under Robert’s Rules of Order, especially as they are frequently used by small nonprofits:

First, someone makes a “motion.” A board member could say, “I move to adopt the budget as presented.”

The next step: Someone “seconds” the motion. This is what allows the board to consider something for a vote. (The board secretary should record the names of the originator of the motion and the second.) If no one chooses to second the motion (which is unlikely but possible), it’s dropped and nothing happens.

At this point the board discusses the motion. No other business of the board can happen until the motion has been resolved. (In Robert’s Rules of Order–speak, the motion is considered “privileged.”)

How is a motion resolved? Generally by a vote.

A note on abstentions

Sometimes a board president will say at this point, “Abstentions?” Someone who has a conflict of interest might voice their name here. Unless you have a specific reason for abstaining, you should vote for or against the motion and not sit it out. Even if you don’t like either option, voting is part of your job.

In a small board meeting, this kind of voice vote is usually enough for the president and the secretary to tell whether a vote has passed, and who voted on which side. But sometimes it’s not clear. If either the president or the secretary is unsure, they should ask for a roll-call vote in which everyone gives their vote one at a time so there is no confusion.

After votes have been counted, the board chair should say something like “The motion passes” or “The motion fails” for absolute clarity. No one should be in doubt about what happened.

Sometimes, though, a motion can be resolved without a vote if the board votes to “table” it, which means the board instead votes to postpone further consideration of the motion until a later meeting.

Technically, “tabling” a motion is not in Robert’s Rules of Order. The book has a different word for doing that. But “tabling” is so universally used that you may as well know it, and expect its use.

PART II—ADAPTATIONS OF ROBERT’S RULES YOU WILL LIKELY ENCOUNTER

In addition to “tabling” motions, nonprofits fudge on Robert’s Rules in some other ways you should be prepared for.

Discussion before a motion, not after.

Almost all nonprofits will discuss a topic for a while before anyone actually makes a motion on it, as opposed to making the motion and then discussing it. The downside of this is that it’s easier to get onto other business unrelated to the topic. So many nonprofits do it, you should be prepared for it.

There’s no such term in Robert’s Rules of Orders, but again: it’s common at board meetings of small nonprofits. Basically it means that someone in favor of the motion suggests something that would improve the original motion, or make it more palatable to someone who is not currently in support.

For example: “I’d like to suggest a friendly amendment, Bob. Where it says, ‘term limits are three years long,’ I’d like to suggest we add the phrase ‘renewable once.’” For some reason this is directed to Bob (the person who made the original motion in my example), and Bob can choose to accept it, or not.

This is workable shorthand for amending a motion. If there have been any amendments (friendly or otherwise) to a motion, the board president should always reaffirm the final text of the motion being voted upon before calling for the vote.

Those are the most common ways that Robert’s Rules of Order are used during a small nonprofit board meeting. Most likely you will never have to deal with anything beyond what’s above. But, it’s a good idea for a board to have a single copy of the rules (or the brief version) handy at meetings in case something more complex comes up.

There are two useful tools Roberts Rules of Order gives board members that may help you during a meeting. They are rarely used, which means that many nonprofit board members may not know of them, but you may find that they help you get a meeting back on track.

A motion is on the table. You can always ask for clarification on what is at stake and what a “yes” or a “no” vote means. If you want to do that, you say “Point of Information” and then ask your question. You may not actually need to say “Point of Information” in a regular meeting, but if things are contentious and you are legitimately asking for information (and not arguing under the guide of asking for information), you may want to preface your question with this. According to Roberts Rules of Order, it has to be addressed.

“Call for the question.”

If a debate is going on and on and on, you can “call for the question.” This forces the board to decide whether to continue debating or whether to just vote.

PART IV—HAVE ALL YOUR RULES AT THE MEETING

It’s a good idea for a board to have a single copy of the rules (or the brief version) handy at meetings in case something more complex comes up.

Your Bylaws Are Also Rules

Keep in mind that your bylaws or board policies might have additional rules of procedure at a board meeting beyond what is spelled out in Robert’s Rules of Order. It’s confusing to have rules in different places, and I would generally recommend against having something so specific in your organization’s bylaws. But familiarize yourself with the bylaws to see if there are any extra rules of order.

Would you like this cheat sheet in a downloadable PDF format for easy printing and distribution to your board? Sign up for the For Small Nonprofits newsletter and I’ll send the PDF right to your inbox!

The Little Book of Boards 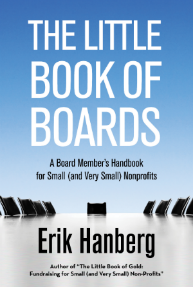 The Little Book of Gold 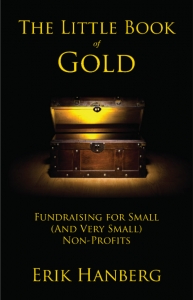 The Little Book of Likes 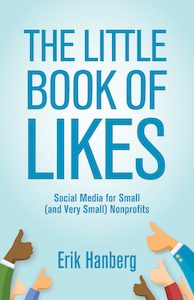